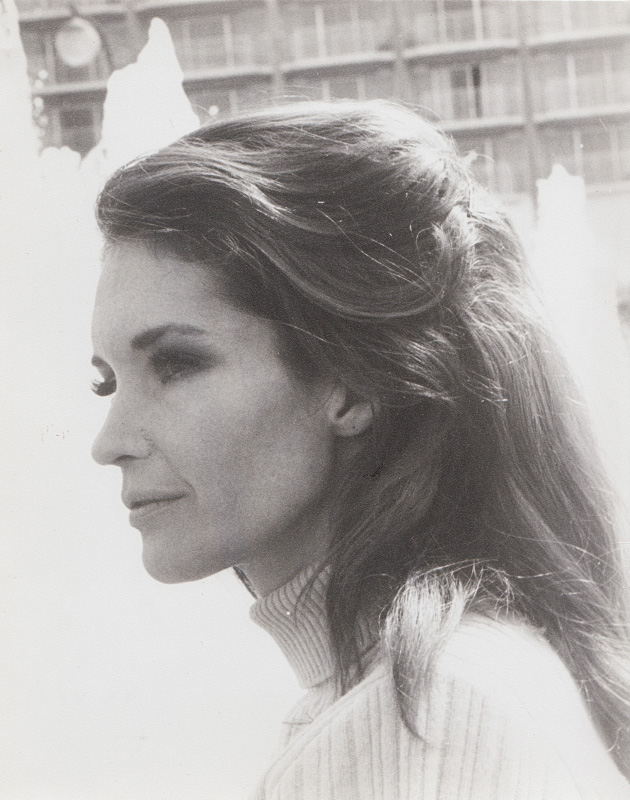 The telephone rings. It’s my agent. I have an interview at 1:00 this afternoon with Jerry Wald, an important producer at Twentieth Century Fox. This is a huge break, and hard to believe it’s happening to me. I put on my best outfit and drive to Twentieth. When I enter his suite two other men are present who right away get down to business, and check me out like I’m the lox and bagels they just ordered from Cantors. They dissect me from head to toe as though I’m not here. Slowly, the conversation segues onto the subject of my name, that it doesn’t meet the standards of other great show business names. Jerry W. says in a thick accent, “Tharon Ann? It’s got no pizzazz!” Who ever heard of a name like that? You listening? I named Jennifer Jones … see the rhythm? You gotta have a three syllable first name and a one syllable last name.” I’m standing here, a cadaver in the midst of an autopsy, watching my birth name fly out the window. The only sound that comes out of my mouth is, “Yes sir, that’s fine.” The young girl once named Tharon Ann, someone I began life with, is dead. I’m suddenly frightened. I want to resurrect her … why did I cave in? … why did I allow him to change my name? Tharon was my father’s name; it’s all I have left of him. Then again, what’s in a name? So what if my ambition caved to a loudmouth star maker. So what. I’ll bury Tharon Ann once and for all. I’m not her anymore. Don’t I have my foot in the door of a major movie studio? This is what counts. I sign a contract with Jerry Wald for his upcoming film, Mardi Gras, starring Pat Boone, Tommy Sands, Christine Carrere, Gary Crosby, Dick Sergeant, Sherrie North, Fred Clark, Barry Chase and me. From this point forward, everyday I drive to Twentieth for wardrobe, hair, makeup, schedules, meeting with various cast members, and rehearsing the musical sequences with a choreographer. Jerry Wald parades me around Twentieth and introduces me like I’m his new toy poodle. Who minds being a poodle? I don’t. Woof! Woof! I’m in heaven.

I have an important interview today. Jerry W. makes a point of telling me to wear the yellow dress from Mardi Gras. He urges me to be very polite to one of the two most influential women in Holly-wood, Hedda Hopper. Louella Parsons and Hedda have gossip columns. They make and break careers with a word, wielding their long, vengeful, sword-like tongues. In 1958, they own this town. People around here treat them like the second coming. We walk over to the set where Hedda, as famous for the hats she wears as her scathing tongue, holds court. Jerry W. bows low and kisses up to her,
“Hedda, love of my life, I’d like you to meet another little lady who loves hats.”

The only hat I like is my old baseball cap, but today I’m wearing a pale yellow cloche style to match my dress. He continues,
“She’s going to be in Mardi Gras. This one has the makings of a star.” Unimpressed, Hedda gives me a quick glance, just enough for me to look into her unyielding steel-blue eyes. For a brief moment, if ever a pissant froze to death inside a popsicle, it’s me standing here right now. She hates me. In an attempt to salvage the moment, I grab hold of my composure, and strain to harness enough sunshine to send a Kodak smile to this powerful woman wearing a hat reminiscent of a rooster chasing a barnyard hen. In a calculated move, Hedda slowly turns her head in my direction, and gives me an icy look that clearly represents her instant opinion of me, which is: “Drop dead you little bitch!”

In silence, I recite the alphabet ten times in wait for sound to come out of her draconian lips. She whispers in the vicinity of where I’m standing, “How nice.” Her head does a three quarter turn, as she summarily dismisses me with a flip of her hand.
Someone once told me I’m too direct with people, that it makes them uneasy. After my lackluster introduction to the Queen of Hollywood I pretend to be dead, and stand there like someone waiting at a red light who dies two seconds before it turns green. Jerry and Hedda continue to plot about exclusive dirt he’ll give her, only if she will not print something he doesn’t want made public. This town specializes in the game of tit for tat. It’s easy pretending to like a person when they pretend to like me, but hard even being cordial to someone who hates me right off the bat. When he’s finished his arm-twisting, brown-nosing chat with Hedda, on we go to our next stop which is the makeup department. As we walk along he tells me how many stars he’s made, pausing long enough for me to acknowledge the double entendre. Once there, he introduces me to a well known man who is polite and eager to please – rare in this town. Everyone has an agenda. What you see ain’t necessarily so. No one around here can point fingers if they’re completely honest.

He takes one look at me and says, “Now little lady, wait here for a moment. I’ll whip up a custom eye shadow that will be perfect for you.”