Baba Ji mentioned he would be travelling for five days in Punjabi towns giving satsang, and wants us to come with him. However, the good doctor believes that in order to have positive long term results, these treatments should be consistent. We’re disappointed but we understand.
Happy day. Doug’s daily sessions with Dr. Sharma have provided much relief. It’s wonderful to see him feeling chipper and more like his old self. Once again Baba Ji invites us to travel with him. I pack clothes for five days. We’re good to go when I hear a knock on the door: it’s Jasbir with a message from Baba Ji telling us the trip has been postponed. Okay. I unpack our clothes, but just when I’m ready to work in the brickyard there’s another knock on the door. Jasbir stands in the doorway with a grin on his face and says,
“Well, are you ready?”
I answer,
“Ready for what?”
He replies,
“Baba Ji leaves in ten minutes for his satsang tour. He will pick you up in five. Be ready.”
He walks away then turns back to me, and says,
“Get moving!”
We can’t be late. I hardly have time to pack more than one change of clothes; clueless as to how long we’ll be gone.
Baba Ji and his driver are in the front seat, and us in the back. I honestly think I finished my first book travelling in the back seat of his SUV. Hard to believe we’re travelling with Baba Ji to his many satsang centers. Everywhere we go he is greeted like the great Saint he is. We spend the night in Ludhiana at the home of Tarsem Singh Bhullar who opens his home to Baba Ji whenever he gives satsang. Baba Ji knows I want to buy gifts for our friends in America. He tells his driver to take me to a little shop no bigger than a closet that sells unique handcrafted gloves, caps and Indian shawls I would never find anywhere else. When I return, Doug is outside waiting for me,
“Jen, hurry up, get in the car. They say we’re in for a surprise. We’re going to the main satsang center.”
We go on another speed-o-drive through the streets of Ludhiana. The moment we walk in, a door opens behind the dais where Baba Ji sits, when a swarm of little children rushes through with their hands over their heads holding pencils for him to bless and help them make good grades. There must be at least two hundred who want his special blessing. The closer they get to Baba Ji, the quieter they become. It’s easy to see he loves children and intends to stay until not one is left. What a wonderful experience to watch him laugh with these kids as he blesses their pencils. What a moment. In the morning we come downstairs where prantas, chapattis and chai are being served. To stand back and watch three or four Punjabi women prepare an Indian breakfast for Baba Ji in a small kitchen is something to behold.

An excerpt from India with Backpack and a Prayer

An excerpt from India with Backpack and a Prayer

I have big days and small days. Today is a small day. I woke up this morning with my throat feeling like sandpaper. Nevertheless, I walk to morning satsang, and afterwards to the shed to make chapattis, peel garlic, and chop cilantro with other women.

Chapatti to an Indian is chicken soup to a Jew. She laughs then answers, “Ja thade li ek Coke.”

Translation: Or Coke to you.

What I wouldn’t give for one about now. I’ll miss her when we leave.

A busload of 125 village people just arrived in a covered truck to lend a hand in the brickyard. They come only for the love of Baba Ji. Their lives are simple, and their acceptance of whatever he gives them is much appreciated. They love doing seva because they know who Baba Ji is. They are simple folks with a deep understanding of this Mystic path. I love being around them. By afternoon I have a full blown cold, sore throat, fever, and a nose that honks every five minutes. I vaguely remember telling Doug I needed ten minutes to rest. Maybe I’m having a dream, but call me crazy if there’s not a carload of kids in our room all whispering shhhhhhhh, and thanking him for the do-dads he bought them. Omg, they want to give me my daily Punjabi lesson. Doug tells them it really isn’t the time. While all this is going on, I begin to daydream about an elderly Indian woman I saw this morning tying rupees in her chuny* same as my grandma used to do. They lived in a poor Mexican neighborhood where the ice cream truck came by daily in hot summer months. My grandpa would yell from the other room, “Lily, loosen up the change from your apron. Some of those little “peckerwoods” out there don’t have money for ice cream. You know the ones.

At 5:00 my fever breaks. I bundle up and sit in the garden drinking a cup of chai Shanti makes for me. I marvel at how these flowers grow in winter. It’s no mystery Indian roses bloom in cold weather for Baba Ji. Summer heat is ungodly, monsoon very wet, and Punjabi winters cold. These people survive with no complaints. By the time we walk upstairs to see Baba Ji, my nose is a small leak compared to the waterfall this afternoon.

These people take each day as it comes by saturating themselves with service to Baba Ji. In so doing, they don’t have time to worry about security down the road. They laugh, they work hard, they love their children, and keep their focus on Baba Ji. As a result, they get more out of life. I’ll keep them close to my heart after we say our last goodbyes. 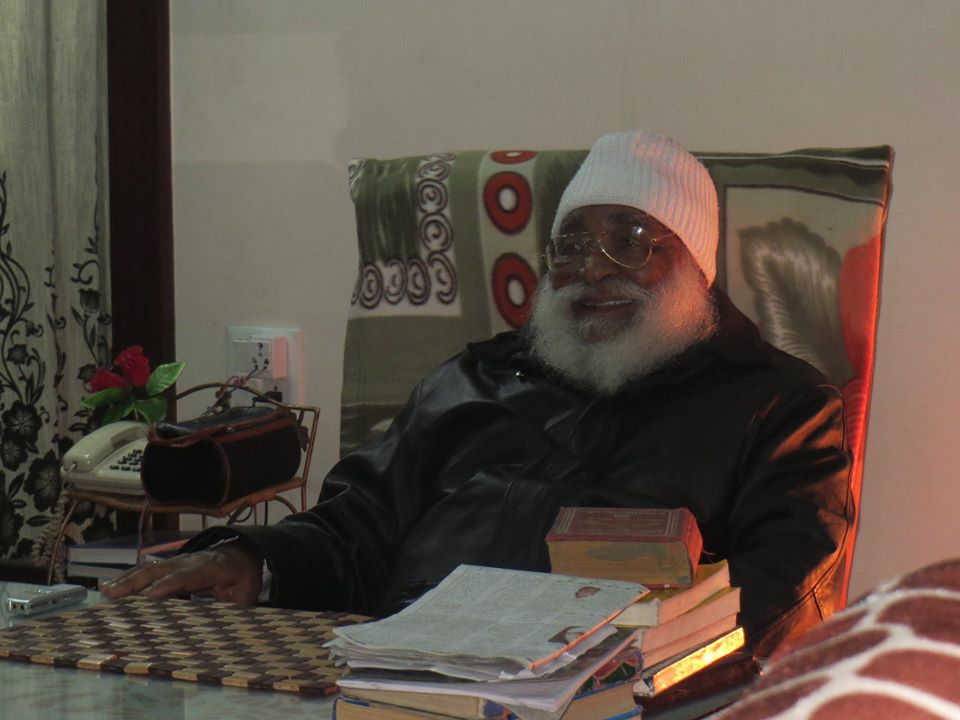 We are early. No matter. It feels good to breathe in fresh morning air. This ancient land has the most unusual mix of sounds one can possibly imagine. Morning satsang begins each day at 9:30 a.m., then again at 6:00 p.m. Everyone takes off their shoes before entering the Bhandara Hall and sits in rows, men to the left, women to the right. I’m greeted by Indian women, old and young, who signal me to come sit with them, especially Sadna with a smile and laughter so rare she could do toothpaste commercials if she lived in the U.S.
Once again Indian women cluster around me asking every imaginable question via mime, since they don’t speak English, and my grasp of Punjabi is hopeless. Doug puts on his shoes and patiently waits. As Jasbir pulls me away, he tells them in Punjabi that Rome wasn’t built in a day. Quite the contrary. We’re more like old friends getting reacquainted … hard to explain.
We walk upstairs to his quarters, take off our shoes and place them outside his door. Baba Ji sits without turban, a white knitted cap pulled down that touches his white beard glistening against honey colored skin. He wears a blue vest, white leggings, and white kurta*. His dark eyes scan our faces as he blesses us in ways that human language cannot describe. I continue to gaze into his eyes as he gives us darshan, an Indian word meaning the blessings received from a Mystic who glances lovingly at someone. He summons Parveen to bring tea. Sitting in the presence of a Mystic is no small thing. Wonder and awe best describes how I feel. I can hardly spea

An excerpt from India with a Backpack and Prayer

“Doug and I had no interest in each other as far as marriage was concerned. Little did we know what was coming down the road. Baba Ji told us we had a choice to marry in this life or take another birth to satisfy our karmic debt. Although we had known each other since 1968, the last thing either of us wanted was to marry, particularly to each other. The kicker was Baba Ji’s words,

Translation: Should you decide not to marry in this life, you will take another birth to satisfy your karmic debt to each other.
We were stunned to say the least. I said I would never write another book after Tharon Ann, and that I would absolutely never marry again. Now here I am writing this book, married to this man. Baba Ji’s words left us little choice. He brokered our marriage and told us to meet the legal requirements of the United States, which we did. A minister performed a private ceremony in our home. For two weeks, none of our friends or work associates knew we were married. Several months later when he visited his American sangats, Baba Ji performed our ring ceremony Punjabi style. No sooner was it over than he whispered in Doug’s ear,
‘Tusi 2 saal deri naal ho.’ Translation: You are two years late.
One of our friends remarked that our initial union was more like Shakespeare’s Taming of the Shrew. Should you wonder how things worked out…so far so good.”

Excerpt from India With Backpack and a Prayer
by Jennifer Brookins, available in paperback and Kindle on Amazon 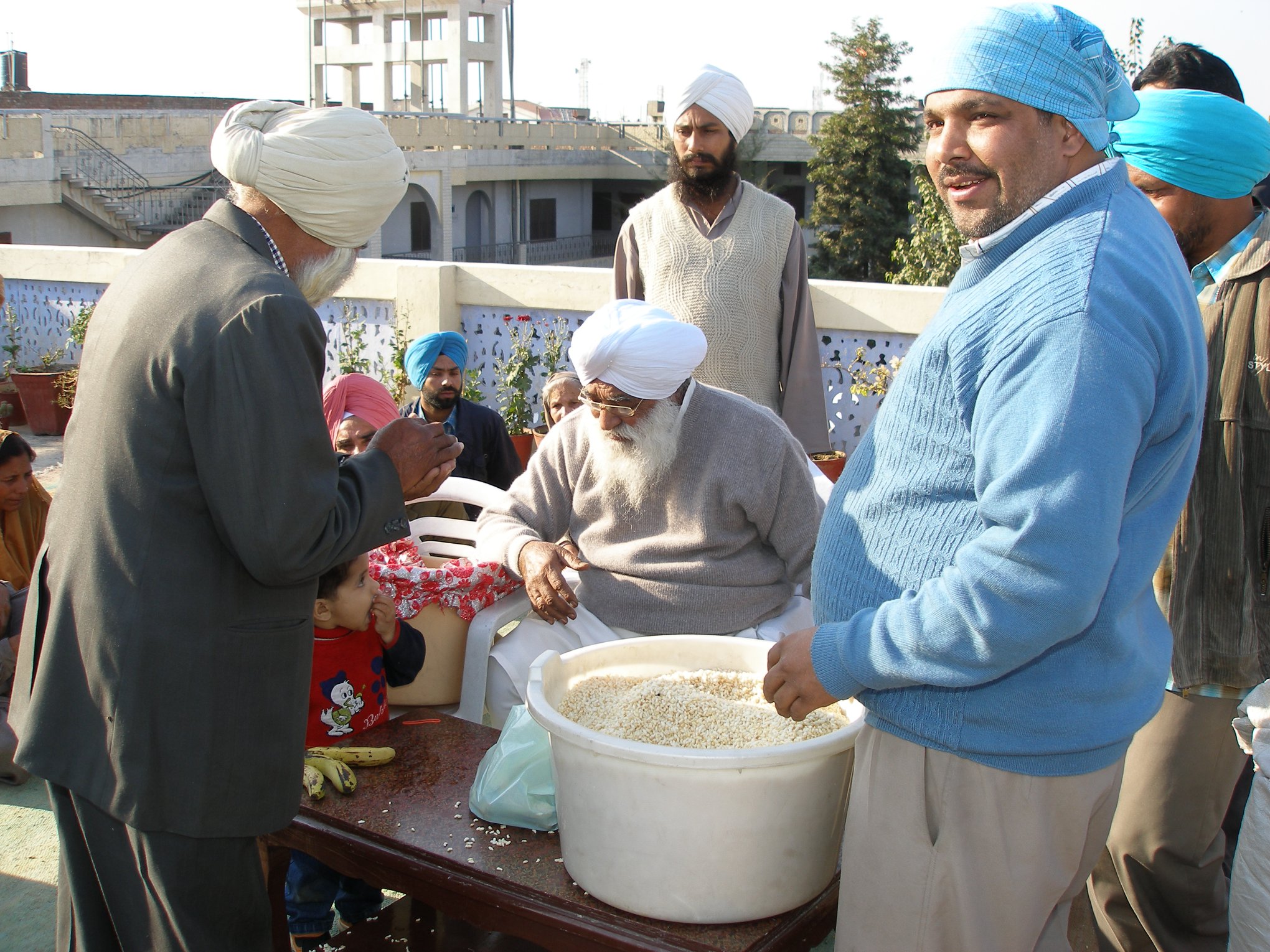 An excerpt from India with Backpack and Prayer